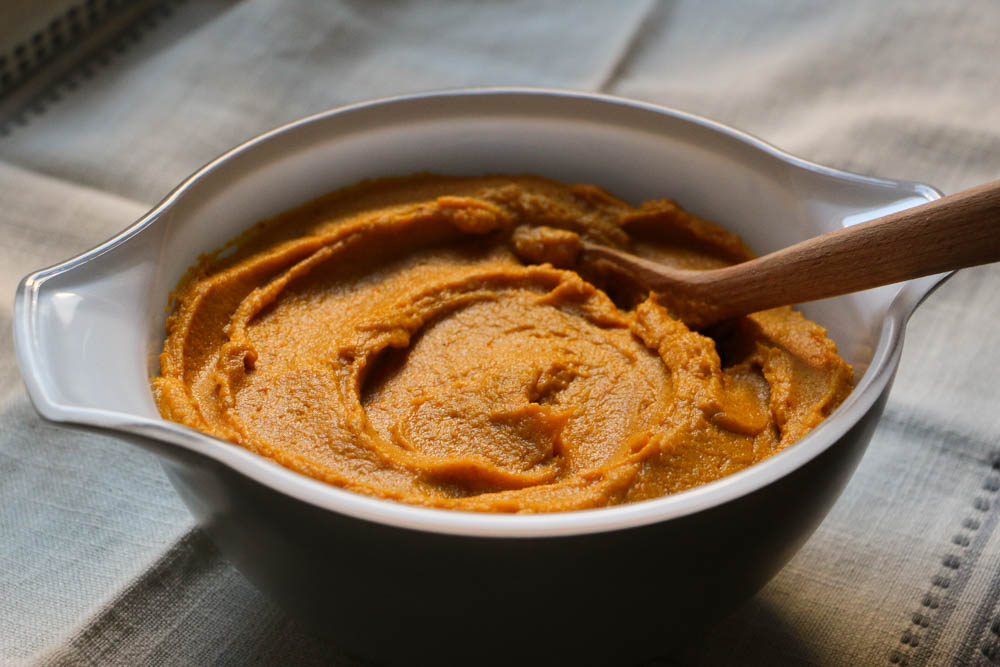 This was actually my first time cooking with red kuri squash.  I’ve known about it for a few years, but have always gotten distracted by other winter squash varieties to try.  I didn’t know what to do with it until I roasted it and tasted the squash on its own.  Oh my goodness…  Sweet and nutty with a creamy texture, I almost ate it plain for dessert.  That said, if you can’t find red kuri squash, I would use half of a kabocha and half of a butternut to substitute.

Browned butter sounds fancy, but it’s actually very simple and should be a part of everyone’s culinary repertoire.  Just melt butter (high quality, pastured butter) in a saucepan over a medium/low flame and just keep going until it turns caramel in color and fragrance.  Next, be ready to remove promptly from the heat so it doesn’t burn!

In this recipe, the warm butter poured over the chestnuts will help them to break down for puréeing.  Which, speaking of, I prefer to use a Vitamix for, as nothing compares to the smoothing capabilities of a good high speed blender.  It takes a little coaxing with the tamper and perhaps a hit of water, but I think it’s worth the effort.  Otherwise, a food processor will do just fine.

1 medium red kuri squash, halved and deseeded (be sure to get all the stringy bits out)

3/4 teaspoon salt, plus more to taste

Preheat oven to 350ºF.  Place squash halves on a parchment lined baking sheet, cut sides down.  Bake until a fork can pierce the skin without much resistance, about 50 minutes.

Once the squash is cool enough to handle, scrape flesh from skin into a bowl (if you get some skin in there, don’t worry too much.  It’s generally edible.)

Place chestnuts in a Vitamix or food processor and set aside.  Melt butter in a small saucepan over medium/low heat and simmer until it begins to brown and release toasty caramel aroma.  Immediately remove from heat and pour into blender or food processor with the chestnuts.   Pulse to break down the chestnuts.  Add cooked red kuri flesh and salt.  Process (be sure to have that tamper handy if using a Vitamix) until very smooth.  Feel free to add a bit of warm water to aid in this process.  Adjust for salt and serve immediately or at room temperature.

I made this when I was visiting family in California and found some fun ingredients in the pantry.  Stuff like crystallized ginger, this World Salt Tower and black sesame seeds.  Not to mention an excellent spice selection and hyper local produce from New Leaf Community Market in Half Moon Bay.

Warm and hearty, this soup tastes like a decadent cream soup, but is actually more of a detox soup in that there is no dairy, little oil and is lightly spiced.  You’ll also get lots of carotenoids (great for the eye health) from the squash and extra minerals from the black Cyprus salt, which is Mediterranean sea salt mixed with volcanic charcoal, a natural detoxifier.

Preheat oven to 425 degrees Fahrenheit and line a sheet pan with parchment paper.  Rub kabocha flesh with olive oil or avocado oil and place cut sides down on parchment.  Pour orange juice into pan and place in oven.  Roast for about 45 minutes, or until a fork easily pierces through the skin and flesh.  Remove from oven and let cool.

In a medium sauce pot, sauté the ginger, onion, celery and garlic in the coconut oil, along with the salt, over medium heat.  Stir frequently to prevent browning.  Once the onions are translucent, add the celeriac, broth, saffron and remaining spices.  Scoop out the flesh of the pumpkin and add to the soup.  Raise heat to high, bring everything to a boil and then reduce heat to low and simmer, covered, for 20 minutes.

Ensure that the celeriac is fork tender and turn off the heat.  If time permits, allow to cool 10-15 minutes.  Put contents in blender, working in batches if your blender is small, and blend on high (though starting at LOW) until silky smooth.  Return to pot and rewarm over low heat, adding water if necessary.  Adjust for salt, keeping in mind that you will be topping with black salt just before serving.

To serve, ladle soup into warmed bowls and top with crystallized ginger (they will sink), black sesame seeds and a few flakes of black Cyprus salt. 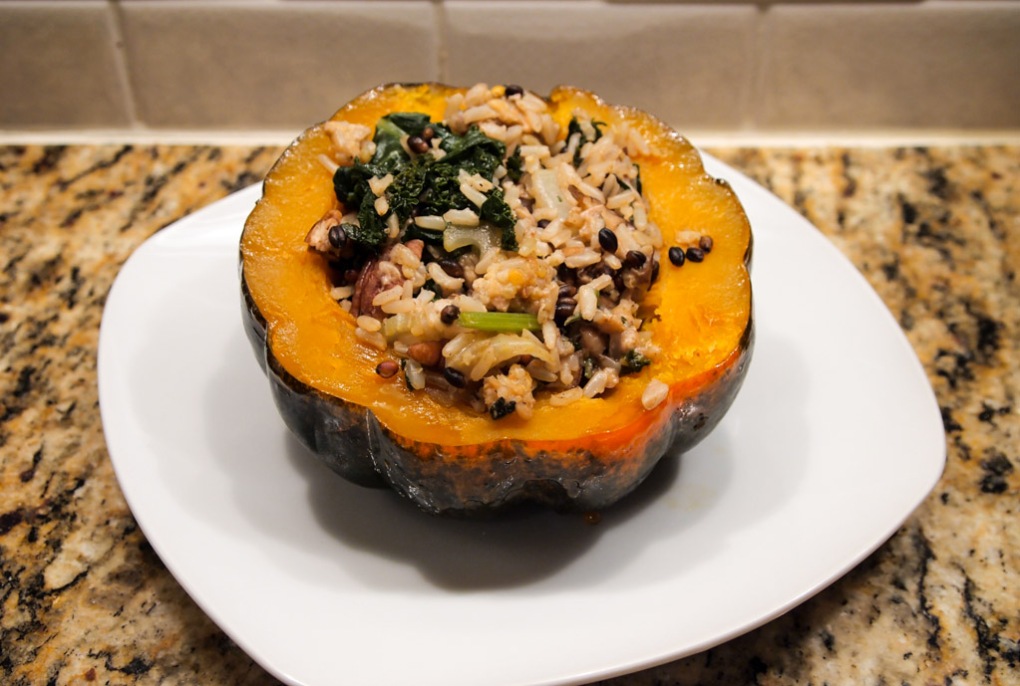 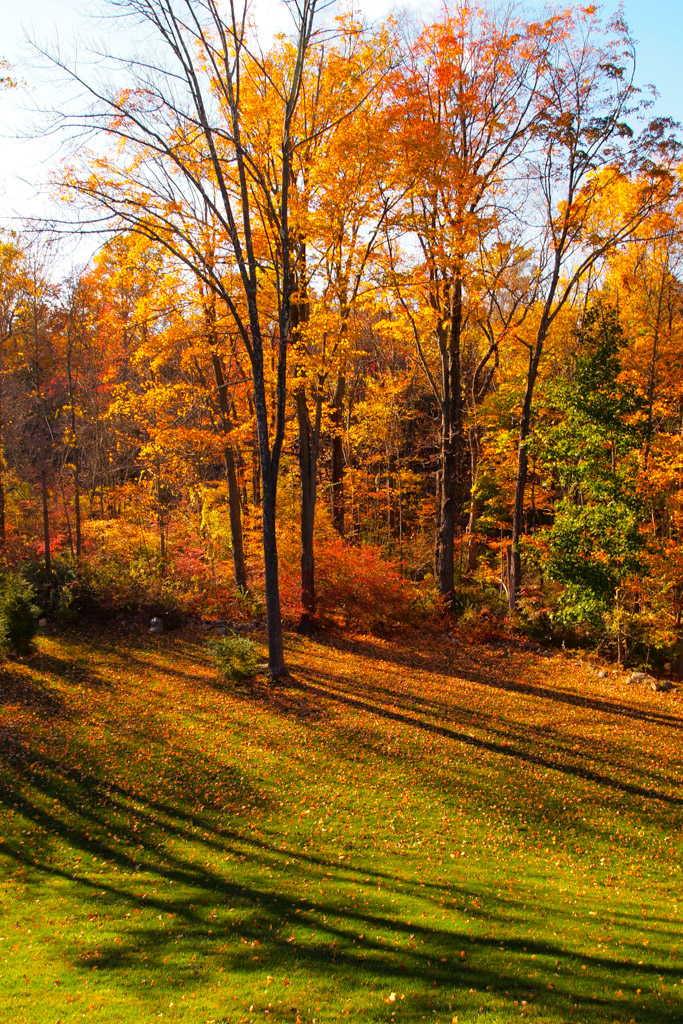 This is the first east coast fall I’ve had in six years, so I’ve been especially excited to cook with the seasons and have stocked up on various winter squashes from the local orchard.

This recipe might have more ingredients than the average person will cook with on a Wednesday night, but I highly recommend it for a healthy Sunday dinner.  The five-grain tempeh and mushrooms take the place of meat in this stuffing and the cider not only helps cook the squash, but creates a nice autumnal glaze.  Also, feel free to reduce the amount of rice to 1/2 cup (uncooked) if you’re carbohydrate paranoid.

I served this with a salad comprised of: red romaine, orange bell pepper, jicama, red onion, pomegranate and feta with balsamic-mustard vinaigrette.

Preheat oven to 400 degrees Fahrenheit.  Pour olive oil and apple cider in the bottom of a high-lipped pan or baking dish.  Arrange squash cut side down and bake, uncovered, for 40 minutes.

Meanwhile, cook the rice in the broth and begin to make the vegetable-tempeh mixture.

In a large pan, heat the olive oil over medium-high heat.  Add garlic and cook for about one minute.  Just as the garlic begins to brown, add mushrooms.  Stir a few times, but allow time in between stirs for the mushrooms to brown.

After about two minutes, add the celery, tempeh, sage and thyme.  Brown for about a minute, add wine (or broth) and cook for another three minutes, covered, stirring occasionally.

Uncover and mix in the cooked rice, pecans, cinnamon, salt and pepper.  Taste and adjust for herbs and spices, adding more, if needed.

Take squash out of oven and flip, cavity side up.  Stuff generously with vegetable-tempeh mixture and serve immediately with a generous helping of fresh salad. 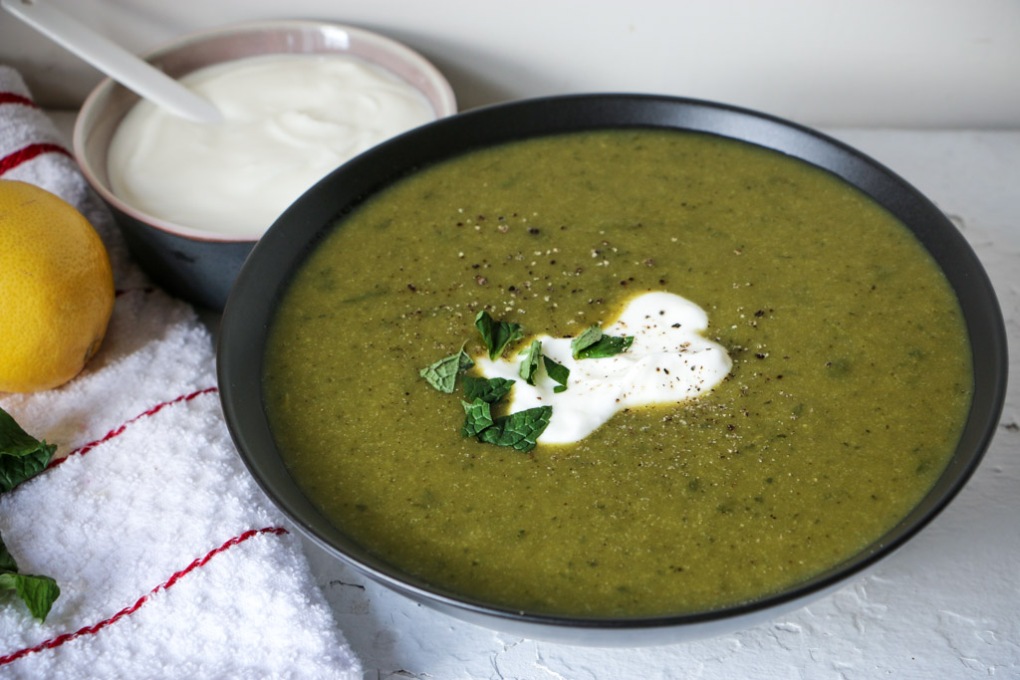 This is a very quick and easy soup that’s also oil free.  I usually have it warm, but it’s also great chilled on a hot summer day.

goat cheese or yogurt (not 0%), to serve

Throw zucchini, shallots, onion and broth into a pot and bring to a boil.  Once boiled, turn heat to medium-low and simmer until vegetables are soft.

Serve immediately and top with goat cheese or yogurt, pepper and a sprinkling of torn mint.  (Great cold too!)

Serve immediately and top with goat cheese or yogurt, pepper and a sprinkling of chopped mint.

Email me at: thecleangourmet@gmail.com
Hire me via Thumbtack